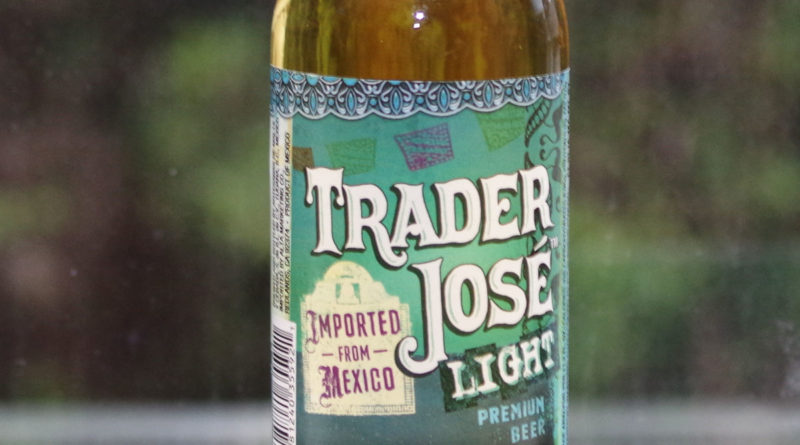 Ahhh, light beer. I have to admit, I used to think I was better than light beer. Back in my college days, I didn’t drink anything lighter than PBR or maybe Rolling Rock. But now I’m older and have a more refined palette. And a larger belly.

The beer pours a light golden color with a small amount of light head. It is very well-carbonated.

I noticed a faint skunky odor. Was the bottle ruined? I took a sip. It wasn’t skunked, at all. In fact it tasted quite fresh. I guess the slightly skunky smell is just a characteristic of the style.

It has a refreshing, light Cerveza-type flavor. I found it to be quite delicious. It reminds me of a Corona, except a bit lighter and drier. Compared to something like Coors Light, it has more flavor and zest — and even a very light taste of hops!

I didn’t expect to like this beer, but I ended up loving it. I will be definitely be buying it again during the summer months.

The “Trader Jose” product line is a play on the store’s name, “Trader Joe’s”. It references a common, or even stereotypical, name in Mexico. Recently an online petition urged Trader Joe’s to discontinue this kind of labeling because it “exoticizes other cultures”.

The company responded. “We thought then — and still do — that this naming of products could be fun and show appreciation for other cultures”. And, “We do not make decisions based on petitions.”

What do you think? Personally I have every intention to continue drinking Trader Jose Light Lager. Is it racist? Well I’m not sure. But I have to point out that the individual that started the petition isn’t named Jose. Maybe someone should just ask him what he thinks about it.

Ozark Trail Sun Shade: Not Worth The Hassle

We love saving money with off brands products. Unfortunately, the Ozark Trail Sun Shade is not worth the discount.

The Six Worst Off Brand Products

The World Of Off Brand TikTok